In a move totally unlike me whatsoever, I bought a new beauty launch that I saw advertised on TV.

Okay, okay – that’s not totally true. I really did need a new mascara anyway, and I saw some photos of girls wearing it on Instagram before I bought it, so I wasn’t going in totally blind.

Since I got completely sucked in by the marketing campaign, I decided to review it, so (unlike me) you can make an informed decision on whether to buy it or not.

In the interest of transparency, I bought this product with my own money (at full RRP!) and all thoughts are my own. I tested this mascara daily for 2 weeks, often wearing it for up to 15 hours, before writing this review.

The L’Oreal Miss Baby Roll Mascara retails for £7.99 and is available at Boots, Superdrug and presumably anywhere else that stocks L’Oreal. When I purchased mine, it was a new launch, so there were extra cardboard stands around the store which stocked the entire range.

As well as black (which is the one I have), this mascara also comes in blue, purple, and teal – as well as in waterproof black. I like that they launched some unusual colours – most mascaras only come in black, and I really like the look of coloured mascara – but I hope they bring it out in brown, too. I really like brown mascara!

Is it weird to talk in-depth about a mascara’s packaging? Oh, well I don’t care, because I have some pretty extensive thoughts on this.

Firstly, I actually really like the design and colours they’ve chosen. It looks quite vintage-inspired to me; I love the baby pink combined with the pale teal. The packaging is quite minimal in design, but I really like that – and it looks fab in photos (I am fully aware most people won’t care if their tube of mascara looks great in photos, but hey – I’m a blogger).

See, I told you it looks good… originally posted on my Instagram

The tube also closes snugly, with a last little ‘click’ to let you know it’s properly shut. As someone who likes their mascaras to last as long as possible, I really appreciate this. Despite fitting snugly, it’s easy to open and close, and I haven’t managed to make a mess putting the wand back in yet, so extra points for that.

As you can see in the photo above, the wand is an unusual spiral shape with lots of short bristles. They are rubberised bristles, but very short and fine, so they do a good job of coating your lashes with product, though you do run the risk of making your lashes too clumpy – unless, of course, that’s the look you’re going for.

I found the best way to apply the mascara with this wand was to hold my mirror directly underneath my chin and look straight down into it, then wiggle the wand gently at the base of my lashes and sweep upwards. This creates a volumised, lengthened and curled lash look, while keeping clumps to a minimum.

I also found the wand really great for my lower lashes – it can be used from any angle, so it’s great for making your lower lashes volumised but fanned out at the same time.

One thing I noticed about this mascara is that it dries VERY quickly. This can be good or bad, depending on your outlook – on the one hand, it can get clumpy if you don’t work fast enough. On the other, you can speed through putting your mascara on, and any mistakes are easily removed almost straight away with a cotton bud. I don’t bother putting on more than one coat of mascara, so it’s a good middle ground for me – enough volume, quickly, with minimal clumping.

I will say that this mascara can make small bunches of your lashes stick together, especially if you don’t comb them all through properly. It does however help my lashes to hold a curl throughout the day – and that’s without eyelash curlers.

There’s a very visible difference before and after application – I was pretty impressed. For the photo comparisons below, I used only one coat of mascara.

While I do have quite long, curved lashes, they’re pretty light in colour – surprising, considering my hair colour – and they need a little help to their full potential. I wear a lot of foundation, concealer and powder too, which often gets mixed up in my lashes, making them even more invisible.

This mascara really helps accentuate my natural lashes, for a dramatic look that isn’t overly bold – perfect for everyday, but will also layer well for a really dramatic look too, if you’re into that.

I’ve been wearing this mascara daily for a few weeks, often up to 15 hours – and I won’t lie to you, it does smudge. By the end of the day – sometimes after only 6 hours – I have shadows under my eyes where it has transferred from both the upper and lower lashes (though interestingly, it never transfers above my eyes). This isn’t unusual for me – between watery eyes and oily skin, most mascaras I’ve tried tend to transfer at least a little below my eyes – but this isn’t the worst I’ve tried, by a long shot. And 15 hours is a very long time – the only part of my face that usually survives intact for that long is my eyebrows.

Despite the smudging, the mascara does stay on all day – my lashes usually still look great by the time I come to take it off.

One thing that’s great about this mascara is the removal – I always use an oil cleanser at the end of the day to take off all my makeup, and this breaks down easily with minimal rubbing. It’s also very easily removed with both dual-phase eye makeup remover and micellar water.

So what do I think overall about this mascara?

Well, I really like the wand and the packaging. The formula works well, and it’s quick and easy to apply, and gives a good curl to my lashes. I also appreciate that it’s easy to remove.

I’m disappointed that it clumps my lashes together easily – I don’t want to be combing through my lashes to get the clumps out, it’s too much fuss. I’m also less than impressed by the smudging – I’ve used non-waterproof mascaras that performed better in their longevity than this.

I’ll finish using this mascara without complaint – I do like it enough to continue! However, I don’t think I’ll be repurchasing this particular one, as it didn’t wow me enough to warrant an immediate repurchase. I may try the waterproof version in the future; I also will probably try some other L’Oreal mascaras.

Have you tried this mascara? Tell me what you thought in the comments! 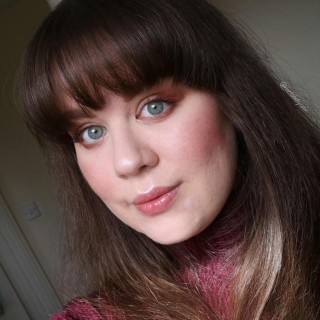 1 of my 2 preferred ways to spend a Sunday evening ♥️ The other one is crafting, obviously 😂
Same stencil, different looks 🍋💜 Who knew purple lemons would look so good? 😂
Fresh off the craft table 🍕 Inspired by my dinner tonight 😋
👌 New video! 📺 After some accidental (but very much needed) time off from YouTube, I'm back with a fun new type of video 🥳 This week I'm making 8 cards - but the catch is, everything has to come from my card making scrap box! Head over to my channel to see how I did 🤓
Check out this AMAZING DIY Stained Glass card making technique 🤩
Want to get more use out of your stickers? 🤔 Today's video shares 5 ideas for using clear stickers in card making... that actually look good! 🤣
Today on YouTube I'm sharing the utimate guide to colouring stamps with alcohol markers.
🎥 Now streaming 🥰 Today on my YouTube I'm sharing a tutorial with 3 different masculine Valentine's Day card ideas - so if you want some inspiration for a Valentine's card, but without the usual pinks and florals, this one's for you!
I set myself 11 different goals this year and one is to get regular exercise back into my routine 💪 A few years ago I had a long period of going to the gym at least 3 times a week, but then I sprained my ankle pretty badly and couldn't walk properly for months 😔 Since I'd always found the gym kinda boring anyway it was the perfect excuse to quit 😂
Massive throwback to summer 2019 when my craft room was our tiny conservatory! There's no way in heck all my stuff would fit in there now 😂 This was one of the first shaker cards I ever made and I remember being super proud of it. Also it has a pun, so what more could you want? 🐝

1 of my 2 preferred ways to spend a Sunday evening ♥️ The other one is crafting, obviously 😂
Same stencil, different looks 🍋💜 Who knew purple lemons would look so good? 😂
Fresh off the craft table 🍕 Inspired by my dinner tonight 😋
👌 New video! 📺 After some accidental (but very much needed) time off from YouTube, I'm back with a fun new type of video 🥳 This week I'm making 8 cards - but the catch is, everything has to come from my card making scrap box! Head over to my channel to see how I did 🤓
Check out this AMAZING DIY Stained Glass card making technique 🤩
Want to get more use out of your stickers? 🤔 Today's video shares 5 ideas for using clear stickers in card making... that actually look good! 🤣
Loading Comments...
%d bloggers like this: